All articles are displayed in reverse chronological sequence. Please scroll to read all or choose a Category

A lot of work went into this release of the Complete Repertory version 2016. In previous years Roger mostly concentrated on remedy additions from cured cases. However this time an original materia medica and repertory, (Carl Friedrich Trinks’ Handbuch der homoöpatischen Arzneimittellehre from 1847), has been added.

This is considered a primary materia medica much like Hahnemann’s seminal Materia Medica Pura, only it contains more remedy provings and toxicology. Trinks was a very early disciple of Hahnemann (see edited biography later in this document)

It is important to note that this work has never been translated into English and therefore few English materia medica and repertories since 1847 have had access to this material.

For Complete Repertory 2016 a huge effort has been made to include the provings/toxicology symptoms from Trinks’Handbuch der Arzneimittel 1847 in 3 volumes, by taking the rubrics and remedies from the repertory section in the third volume and merging those into the Complete Repertory.

This work has resulted in over 275,000 source additions into Complete Repertory 2016.

Trinks work is one of the few that make a clean separation between provings/toxicology and any clinical/cured material coming from practice, so it is considered a true primary Materia Medica.

A very nice detail in Trink’s opus is the fact that all remedies have been graded using Bönninghausen’s grade system (of course : given the date of preparation!), resulting in lowest degree, plain type, and second degree, italics, additions. These additions, combined with already available information from practice (cured cases) will often increase the grading from lowest or second degree (i.e. provings/toxicology or single cured case-additions without proving/toxicology) to third or even fourth degree additions (provings/toxicology AND cured) which will make analyses with ISIS Vision that includes Complete Repertory 2016 much more refined.

Often Trinks data has been already been verified by other authors and so has already been included in the repertory. However  a quick examination using Complete 2016 with ISIS Vision shows there are many new additions made that we now have access to! Please also bear in mind that these are additions made on the basis of sound provings and toxicological reports in the classical way

Here is a screenshot of just one rubric: anxiety, with pain. Trinks is author number 4 in our classification system and the additions he has made to Complete 2016 are highlighted as below.  And this is just 1 rubric in the entire repertory.

In addition to Trinks’ work, around 760 more articles from the Homoeopathic Recorder and to a lesser degree from the British Homoeopathic Journal have been read and remedies from these have been added into the Complete Repertory 2016.  Also as a reaction on a promise made during a repertory workshop with George Vithoulkas around the year 2000 in Alonnisos for those working on repertory, in which it was concluded that much more cured case-info should be added into the existing repertory material, - for this edition of the Complete Repertory nearly 3000 sources have been consulted since then to update the repertory with more cured material. 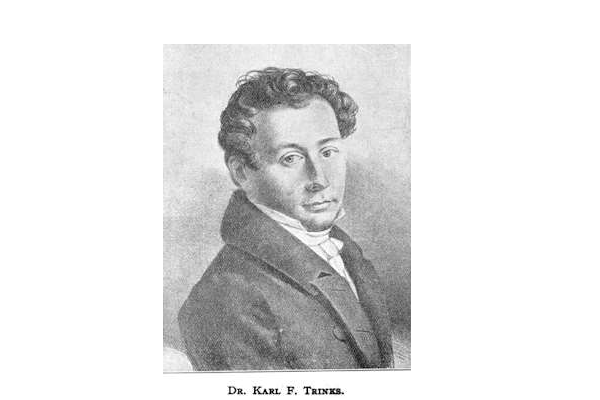 One of Hahnemann's earliest disciples, he was also one of the greatest gains to the new system. A man of indefatigable industry and self-sacrifice, he contributed largely to the construction of the Homoeopathic Materia Medica, and his name will be found constantly recurring among the band of provers who aided Hahnemann in his Herculean task.

In conjunction with Noack, (or we should say almost single-handedly for Noack soon gave up) he published the Materia Medica that bears their joint names.

Hahnemann, whom he frequently saw on the promenade at Leipsig, he visited first at Coethen in 1825, again in 1832, and once, subsequently, with Councillor Wolf. In 1824 Trinks settled in Dresden. He and Ernst von Brunnow were the earliest Homoeopathists there.

In 1830 Trinks attended the first meeting of Homoeopathic physicians held at Leipsig, and assisted in the foundation of the Central Society of German Homoeopathic Physicians.

The only volume of importance published by him was that in which he was a joint author with Noacks - the well-known Noack and Trinks' Handbook of Materia Medica ; but the essays he has contributed to the periodical literature of Homoeopathic medicine are numerous.

This preference for fact over theory, his love for the real rather than the ideal, contributed largely to make Trinks what he was: a thorough physician.

Homoeopathy he loved, because in its school alone did he meet with that full development of the principle of pure observation he felt to be so necessary for the practice of medicine.

A thoroughly independent thinker, it was not long before he found himself somewhat opposed to Hahnemann ; and on one occasion he had a discussion with Boenninghausen, when Boenninghausen endeavoured to introduce mixed medicines into the practice of Homoeopathy.

He most earnestly opposed everything in the shape of mysticism, everything having the aspect of humbug with which it was sought to connect Homoeopathy. On these grounds he declared himself an enemy of the so-called high potencies and a supporter of the lower dilutions.

At an early period of the history of Homoeopathy, when Hahnemann was in danger of being led away by some of his enthusiastic but incautious disciples to promulgate crude and untested notions, Trinks' common sense prevailed with the founder of Homoeopathy and prevented him from committing himself to views that could not stand the test of experience.

Trinks' manner to one seeing him for the first time was often blunt and even somewhat repulsive. His dietetic rules for those under his care were very rigid, his prescriptions, carefully selected, were adhered to with a tenacity which, though often regarded as unwise by those around him, was generally rewarded by satisfactory results.

Throughout the North of Germany Trinks was regarded as the most distinguished physician who had practiced Homoeopathy since the time of Hahnemann.